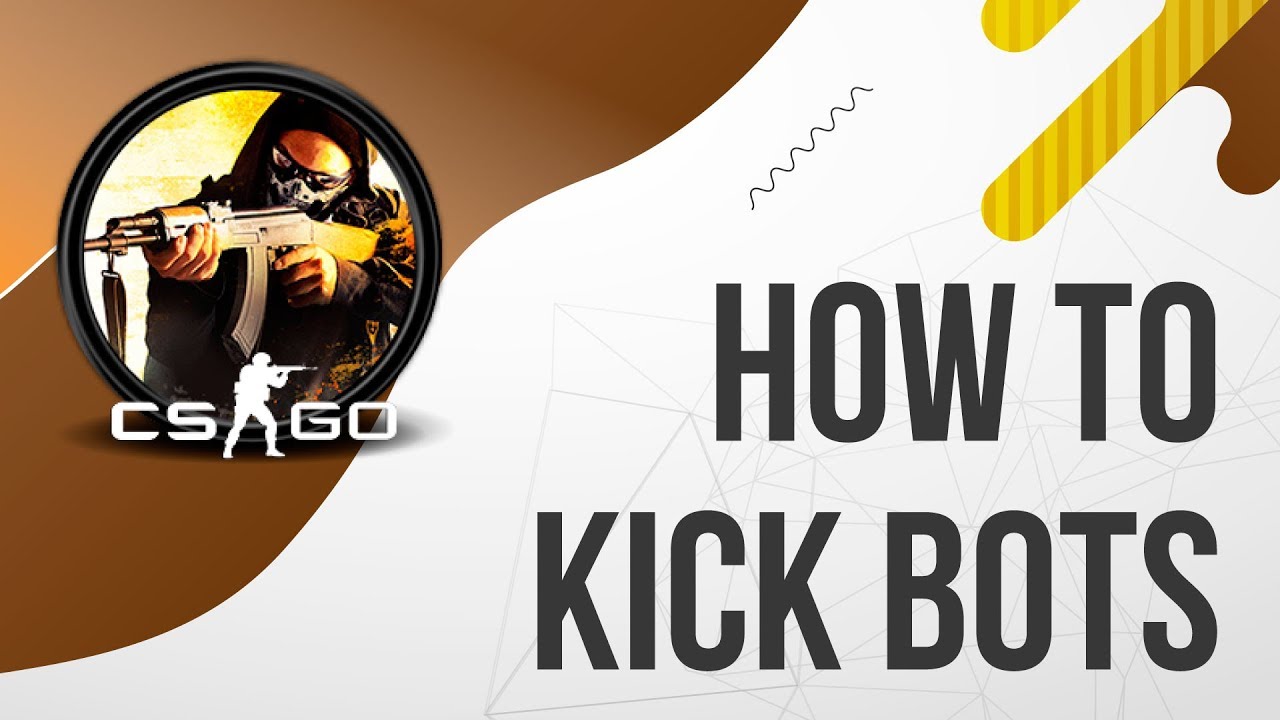 Among the many inconveniences that artificial intelligence unleashed upon us, bots in games like CSGO remain one of the most bothersome. They were easy to deal with at first, and they were actually beneficial in terms of practicing and getting to know the game. However, new updates have made them much more unbearable, and they might even ruin your gaming experience.

For this reason, we’ll help you! We’ll tell you all about how to remove bots in csgo and enjoy your time without virtual robots. All you have to do is read on!

Contents show
Enable the Developer Console
Know the Key bind
Input the Code
Kick Bots
Kick Bots From Counter-Terrorist Side
Bring Bots Back
Different Commands
Why Should I Kick Bots in CSGO?
Frequently Asked Questions
How Do I Change Bots’ Difficulty on My Server?
What Is the Best Headset to Use While Playing CSGO?
What Command Should I Use to Enable Friendly Fire in CSGO?
How to Kick Yourself in CSGO:
What Is the Best Monitor for CSGO?
To Wrap Up

Next, you should see various sub-menus at the top of your computer screen. Go to Game Settings and look for an option called Enable Developer Console in the first part of your menu. Clicking on this option will make a drop-down menu open in front of you.

All you have to do then is change the option to Yes instead of No. Don’t forget to press on ‘Apply’ so that the game will save your changes. After doing this, you’ll be allowed to open a small menu, which you’ll use to type different commands to meet your gaming needs.

In general, you should note that your console will be set on default to the “~” button as a key bind, but you can change it according to your personal preference through the mouse and keyboard settings. However, most people leave it as it is.

Knowing the key bind is critical because it’s the key to the menu where your commands will go. Once you click on your designated key bind, a menu will appear on your computer screen. You’ll notice a small text box at the foot of the menu. This is where you’ll input the code that’ll magically kick the AI bots from your game.

The code you’re about to input will free your soul from the ever-annoying bots. However, you should pay attention to this part because it’s vital to write the correct code. But don’t worry! The command isn’t as hard as you’d think. You can also memorize those codes or write them somewhere so you won’t have to go through the headache of searching for them again.

The first thing you should do here is type ‘mp_limitteams 1’. This code will ensure that the bots won’t join your game again after being kicked away. As a result, you’ll be free of them until you finish playing.

Second, you have to type ‘mp_autoteambalance 0’ to prevent the AI soldiers from automatically entering your team to balance the number of players. This is called auto-balancing, and it’s one of the main jobs of bots.

Next, head to the command line and type ‘bot_kick’. The last step is to click on Enter, and voila! You just successfully kicked the bots. You can start with this step and skip the previous two, but bots will join your match again after a while of kicking them.

However, you should make sure that you inserted the right code and it worked. To do so, check the chat for any notification. If you see one that says ‘Player BOT ___ Left the game (Kicked by Console)’, then the bots are successfully out, and you can start enjoying.

Kick Bots From Counter-Terrorist Side

There are also different commands that you can use when you want to remove bots from other sides. For example, in the case that you want to kick bots from the counter-terrorist side, you can type in ‘bot_kick ct’ in the command line.

However, you should be aware that adding and kicking bots is only possible if you’re playing on a private server or any server that allows you to do so. To put it simply, if you’re the host of the game, then you can do as you like. On the other hand, if you joined a random game on an unknown server, you might not be as free to do whatever you like.

If for any reason, you want to bring the bots to your matches again, you can simply reverse what you just did. All you have to do is type ‘bot_add t’ or ‘bot_add ct’ in the same command line where you typed the first command. You should memorize those commands because they’ll come in handy if you want more players on your team and no humans are available.

Finally, there’s a command called ‘bot_quota_mode’ that you can use to control the behavior of the bots. It has three different options that you can try out. The first one is ‘bot_quote_mode normal’, which will set the bots’ behavior to normal. If you have empty spots on your match and want to fill them with bots, you can type ‘bot_quota_mode fill’.

The final command you can use is ‘bot_quota_mode match’, and it’ll balance the ratio between bots and human gamers in your match to 1:bot quota.

If you want to have some fun while controlling how bots act, there are two commands you can try. To freeze all of the bots in the match in their place, you can type ‘bot_stop 1’ in the command line. In addition, if you want your bots to use only knives as weapons, you can type ‘bot_knives_only 1’.

Why Should I Kick Bots in CSGO?

Bots used to be enjoyable to practice with at first. They benefited gamers, especially beginners because they were easy to kill. However, over time, they became more of an annoyance that players need to get rid of the minute they enter a match.

This is mainly because they bother gamers when they want to do something as simple as practice throwing smoke or discover a particular map.

Moreover, while some people think that they’re beneficial in practicing different weapons and killing techniques, their mediocre performances pose no challenges whatsoever. They may benefit beginners, but other than that, they’re only irritating.

However, these days, bots look much more intimidating than before, and they might not be as bothersome as they used to be. But it’s still most players’ wish to kick them.

How Do I Change Bots’ Difficulty on My Server?

You can change your bots’ difficulty settings using a specific command. You should type ‘bot_difficulty’ followed by your preferred difficulty number. There are four settings, ranging from 0, which is easy, to 3, which is expert. You can choose whatever setting you like and type its number after the command.

What Is the Best Headset to Use While Playing CSGO?

Some CSGO professional gamers like the Logitech G Pro X for long sessions, while some prefer the HyperX Cloud Alpha because of its superb sound quality. However, the best headset for CSGO depends on your personal preference and requirements.

What Command Should I Use to Enable Friendly Fire in CSGO?

If you want to turn the Friendly Fire option on or off while you’re playing CSGO, all you have to do is go to the console and type in this command: ‘mp_friendlyfire <0/1>’.

How to Kick Yourself in CSGO:

If you want to kick yourself out of the game, you’ll have to pay a visit to the console again. This is, of course, after you enable it. The command, ‘callvote kick’, will let your teammates make a choice between keeping and kicking you out of the game by triggering a vote kick.

What Is the Best Monitor for CSGO?

While the ultimate choice depends on your budget and requirements, the BenQ ZOWIE XL2546 ranks high among many players, and it deserves the title of the best monitor for CSGO.

CSGO is one of the most enjoyable games on the market today, but dealing with bots can affect the quality of your gaming time. At the very start, bots used to be beneficial when it came to training and practicing different weapons. However, they’ve recently become a nuisance to players.

Luckily, kicking bots is a simple process that you can do by enabling the developer’s console and punching some command lines inside. After doing so, you can enjoy a bot-less, delightful match!

Now that you know enough about the topic, you can try different commands to enhance your CSGO experience!