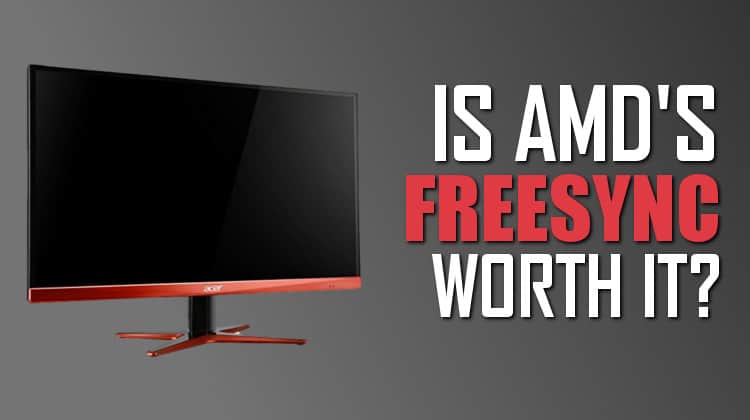 Is FreeSync Worth It? What Does It Do?

You may have wondered whether investing in a FreeSync monitor is a good move. Well, wonder no more cause we’ll tell you all about FreeSync in this guide.

Here, you can find out what FreeSync does, whether it’ll work with your PC, in addition to all its pros and cons.

What Is FreeSync and What Does It Do?

FreeSync is a technology launched by AMD in 2015 aimed at eliminating display problems encountered in graphically demanding games.

The two main problems encountered are screen tearing and screen lagging/stuttering. The screen tearing occurs when your GPU has a higher frame rate than your monitor’s refresh rate.

Here the GPU sends more frames/images than the monitor can display in one second, which results in an image that appears halved or split-up. For example, your graphic card can send 120 frames per second to your monitor, but the monitor can only display 60 of them, hence the screen tearing effect.

To solve this problem, the vertical sync feature, more commonly known as VSync, was created. It allowed the GPU to cap its frame rate at the maximum refresh rate of the screen. So, your 120 FPS GPU will only send 60 frames per second to your 60 Hz monitor.

Unfortunately, another problem appeared where your graphic card might sometimes dip below your monitor’s refresh rate with GPU intensive games or when multi-GPUs send frames at different times. This caused the problem of screen stuttering.

Here, input latency crops up, and the image feels as if it’s lagging or skipping, which can be highly annoying, especially when it happens in an intense part of the game. This can highly affect the performance of competitive gamers, so FreeSync was invented by AMD to tackle these problems.

FreeSync works by syncing up your graphic card and monitor so that they match at all times. It works by changing the monitor’s refresh rate, increasing it when the frame rate increases, and vice versa.

It remains effective as long as the refresh rate stays within the 48-75 Hz range, although some monitors may have different limits.

You may have come across the term G-Sync when you were looking into different adaptive sync technology. G-Sync is the NVIDIA counterpart to the AMD FreeSync and was the first sync technology launched in the market.

G-Sync functions in the same way FreeSync does; however, it was designed to alter hardware and only work with NVIDIA monitors, graphic cards, and their own G-Sync scaler module.

On the other hand, FreeSync is compatible with a wide range of monitors since it uses an open standard configuration, known as adaptive sync, that alters the software. This configuration allows various monitors to work with FreeSync-compatible graphic cards by the action of an off-the-shelf scaler module that matches said graphic card.

When buying a G-Sync compatible monitor, you end up paying part of the quite pricey licensing fee that monitor manufacturers have to pay to incorporate the G-Sync-module design in their monitors.

However, with FreeSync, you can choose from a wide variety of monitors and gaming systems that cost much less and will better suit your budget.

Handy Hints: what Is vsync and should i turn It on or off?

As previously mentioned, FreeSync eliminates screen tearing as no extra frames are sent while one is being displayed, as well as reducing screen stuttering caused by the monitor waiting to finish the current frame.

Another added benefit is that it extends your battery life because the screen doesn’t constantly refresh even when not receiving images.

In the newer FreeSync Premium technology, a feature called LFC (Low Framerate Compensation) was created by AMD to be used in conjunction with FreeSync. It makes a monitor duplicate the frames if its refresh rate falls below the range supported by FreeSync, especially with GPUs of 30 FPS and less.

Long story short, it allows you to enjoy a smoother running game by replaying the frames to at least reach the minimum refresh rate backed with FreeSync, making the best of older and slower-performing monitors.

Therefore, you have to carefully look at your monitor’s specifications and make sure its range isn’t lower (or higher) than the FreeSync limit. However, LFC has mitigated this problem to some degree.

Another disadvantage was that FreeSync didn’t work with NVIDIA graphic cards and monitors. However, in 2019, NVIDIA stated that recent GPU owners can use G-Sync with FreeSync monitors that fit NVIDIA’s standards through the use of a toggle in the Control Panel.

Ultimately, Is FreeSync Worth It?

Think of it this way: Is FreeSync absolutely necessary? No, yet, once you try it, you won’t really want to go back to the days before its use.

With it, all the annoying tearing, input latency, and stuttering will be gone, which will improve your gaming performance due to the more even and smoother gameplay.

If you’re a hardcore gamer and typically play intense Triple-A games, then you’ll greatly benefit from a FreeSync compatible monitor. It works just like a G-Sync monitor, but for a much lower price.

All AMD graphic card owners can unreservedly utilize FreeSync. NVIDIA GPUs, starting from the GeForce 10 series, will also work with FreeSync as long as they support adaptive sync. So, make sure you check the specifications thoroughly before marching ahead.