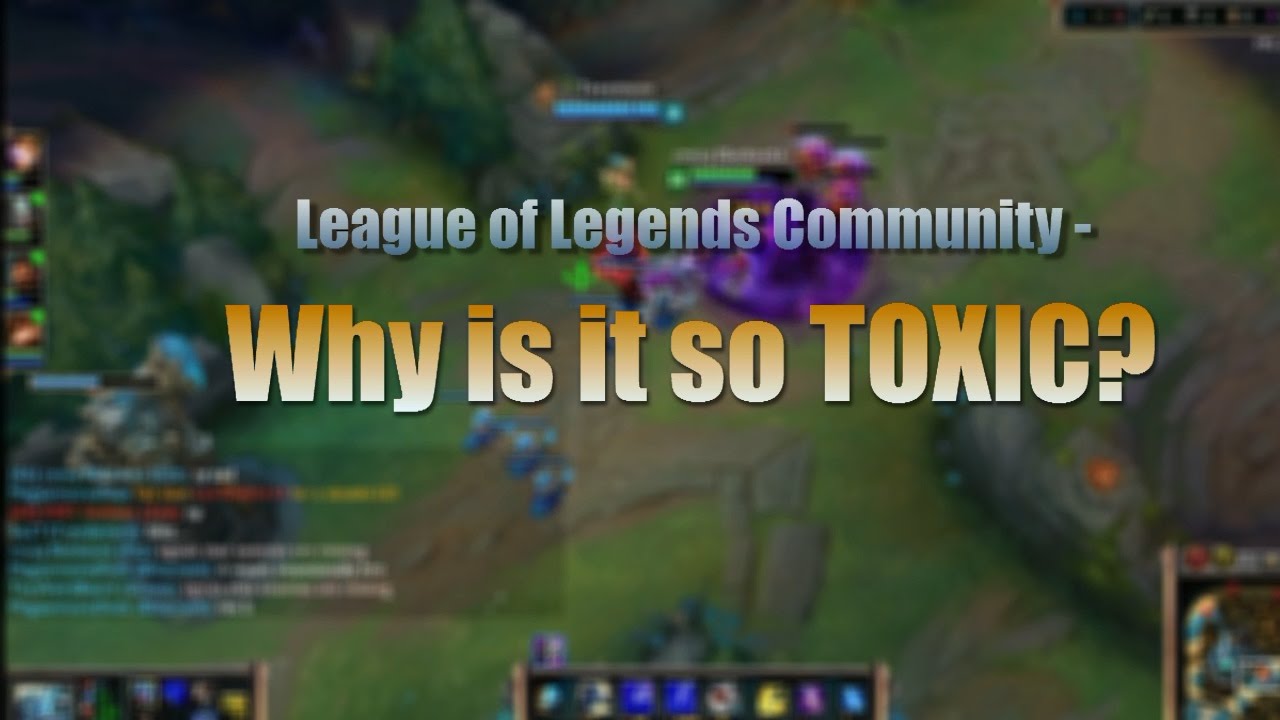 Why Is League of Legends So Toxic?

The last place you’ll expect to experience toxicity is behind your screen while playing a video game in the comfort of your home. However, negativity in video games such as League Of Legends is quite common.

In this post, we’ll take a closer look at the causes of toxic behavior in League of Legends. We’ll also show you how you can handle toxic players and avoid becoming one.

Contents show
League of Legends and Toxicity
Why Players Resort to Toxicity?
Ways Players Can Be Toxic
Intentional Feeding
Trash Talking
Leaving the Game
How to Handle Toxic Players
Report Offenders
Mute Toxic Players
Talk to Them
How to Avoid Becoming a Toxic Player
Separate the Game From Reality
Obey the Golden Rule
Final Thoughts

League of Legends and Toxicity

League of Legends is one of the most competitive games out there. Due to its competitive nature, players do whatever it takes to conquer their opponents and secure a win, even if it means dishing out harmful and vulgar comments.

Often, these players resort to making hurtful statements to other players to encourage them to work harder or kill their motivation to play the game if they’re on the opposite side.

LOL is structured so that teammates have to work together if they want to secure a win. If one member lacks in any aspect, it’ll affect the performance of the entire team. Toxicity doesn’t always come from opponents; it can arise from within your group.

Why Players Resort to Toxicity?

One of the benefits of video games is that you don’t have to leave your home to play with your teammates. As long as you have access to a computer and a good internet connection, you’re good to go. While you may play with people you’ve never met physically and will probably never meet, that adds to the thrill of the game.

Yet, sometimes, it’s easy to forget that you’re playing with other human beings since all you do is sit behind a machine and play. As a result, you can lose sight of the fact that your words or actions can cause harm to other players.

Another reason players of League of Legends resort to toxicity is they either feel superior or inferior to their co-players. Let’s face it; everyone wants to win. No one wants to end up as the loser at the end of the day.

For some players, winning against their opponents means everything to them. If you’re winning the game, you might find yourself looking down on your opponent. If you aren’t careful, you’ll start making hurtful comments to your opponent to make them feel less of themselves.

However, there’s no proof that engaging in activities that threaten other players will increase your chances of winning. Instead, you end up using quality time meant to help your teammates win to harass or taunt your opponents.

In contrast, toxicity can also arise from players that feel inferior. Most people refer to verbal abuse to substitute what they lack in muscle or skill. Whether they win or lose, some players never skip an opportunity to make rude and nasty comments about other players.

Read also : How to Get More Rune Pages in League of Legends.

Ways Players Can Be Toxic

Toxic behavior in League of Legends comes in many forms. Although the first thing that comes to mind is verbal abuse, there are other ways people attack other players.

Intentional feeding refers to when you allow the enemy to kill you without any defense from your side. As mentioned earlier, for your team to be successful, every member has to be completely involved. Therefore, the entire team loses when you give the enemy an advantage over your team by making it easy for them to kill you.

There are many reasons why a player will do that. For example, suppose the player has a bone to pick with another player on the team; that’ll be very convenient for them. Intentional feeding is one of the easiest ways to ensure that that player doesn’t win. Although the said player will also not win, their desire for revenge far outweighs the main reason for playing it.

Also, some players might accept money from the enemy to destroy the game for their teammates. For a game founded on teamwork and cooperation, this is perhaps one of the worst forms of toxicity.

Trash talk involves using verbal attacks to mock how someone plays or hurt their feelings to affect how they play. It has become prevalent among League Of Legend players. To some, it makes the game more interesting. However, trash-talking becomes toxic when players consistently insult other players with statements not linked to the game.

For example, insulting one’s race or nationality is frowned upon in League of Legends. However, you should understand that the game attracts players from different backgrounds; hence, vulgar words might be normal for some.

It can get out of hand pretty quickly if both parties jump in. So if you’re ever tempted to trash talk while playing the game, pause for a second and ask yourself how you’d feel if someone talked to you like that.

It’s easier just to quit when you’re getting frustrated during a League of Legends game. The issue with that is that you’re not the only one playing the game. You’re part of a team, and you should work together to conquer your opponent. Since players can’t just leave the game, they remain inactive.

When you stop playing deliberately while the game hasn’t ended, it’s known as Away From Keyboard (AFK).  A move like that can affect the success of the team before every player matters. We doubt you’ll continue playing with your team if you’re caught in this practice.

How to Handle Toxic Players

Being on the receiving end of toxicity is an experience no player would want to have. However, as much as you try ignoring the actions of toxic teammates or opponents, retaliating can seem like a good idea.

This will just give them more reasons to continue, and the game won’t progress. So instead, consider doing any of the following when you encounter demanding players.

Players who consistently exhibit toxic behavior while playing League of Legends can be suspended or banned permanently.

Reporting a player to the support team will draw their attention to the offenders, and the player or players who are guilty of trash talking and other harmful behavior will be dealt with accordingly.

All players should enjoy League of Legends, and no one has the right to make anyone feel uncomfortable. However, don’t report any minor issue you encounter; ensure that your concern is genuine. Other serious matters equally need the attention of the tribunal or support team.

You may also like : Best controller for rocket league.

League of Legends has a mute function that allows you to mute a particular player verbally abusive. To mute a toxic player, go to the Tab button and select the player you want to mute.

You can also silence all the players in the opposing team by turning off all chats in the options menu.

Although this might not work in all cases, talk to your teammates and make them understand how harmful their actions are.

Even if you don’t get a good response from them, try to understand why they do what they do. They might be more accommodating if you use a friendly approach.

How to Avoid Becoming a Toxic Player

It’s easy to point accusing fingers at others when we do wrong, but sometimes, we end up doing the very things we condemn. These are some ways you can avoid becoming a bully on League of Legends.

Separate the Game From Reality

League of Legends can get so addictive that you tend to lose touch with the real world. Once you understand that what happens in video games is different from reality, you won’t take the actions of others to heart.

For example, you won’t lash out at a teammate in the chat section because they made a mistake. Instead, you should focus on helping your team beat the opponents.

You should treat others how you want them to treat you. Think of how you felt the last time someone sent you an abusive message while playing the game.

Perhaps, it even affected your performance during the game. That’s how others will feel when you harass them.

You can’t control what people want to do, especially if you can’t see or hear them. However, you can control how it affects you. Multiplayer Online Battle Arena games should be a place where you can play with friends and enjoy yourself in the process.

Fortunately, there are ways you can put a stop to people who’d want to disrupt your fun by being verbally abusive or harassing you. Feel free to mute or report players who try to get under your skin.

If you’re an offender yourself, you should remember that there’s a human being with feelings behind the computer screen on the other end, and your actions can cause serious harm.