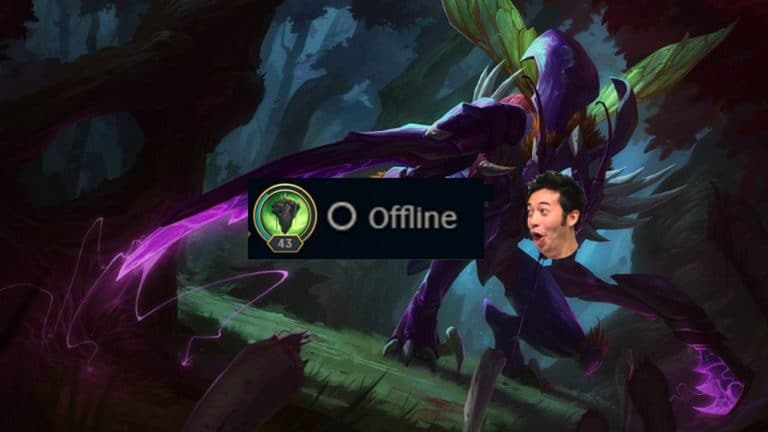 How to Appear Offline on League of Legends

The gaming world has developed so much that you can play with other players across the world and chat with them simultaneously. Gone are the days when you had no option other than playing by yourself. However, although playing with someone else can be fun, it may turn out to be boring.

League of Legends is one of those online games that allow you to communicate with other players around the globe via texting and audio chats. While this can be highly entertaining, you may at times choose to focus or spend some time playing solo.

Constant chatting and interruptions from other players can be a nuisance. And the thought of hiding from all the distractions may have crossed your mind. This article sheds light on the methods you can use to appear offline on League of Legends. They are easy to use and do not require any coding skills.

Appearing Offline on League of Legends

The following two methods can help you appear offline on League of Legends.

You can use Command Prompt to block your PC from connecting to Roit’s chat servers and, therefore, appear offline. By including a rule in your firewall, you can block the server’s IP address. Then, you’ll be disconnected from your PVP chat, and your friends won’t see you online.

The good thing is you don’t need to use a particular program for this process. All you need to do is apply the following steps, after which you’ll receive a message informing you that you’ve been disconnected from the PVP chat. You should know that this message doesn’t affect your games, and it’s pretty easy to switch from offline to online mode.

First, you’ve to be sure that your Windows firewall is enabled. You can enable it from your computer’s settings by clicking on the “Control Pane” and clicking on “Windows Firewall” from the “System and Security” tab.

Then, you need to apply the following steps to appear offline.

Following the above steps, you’ll appear offline when you log into the game. However, if you followed these steps while you were already logged in, you’d need to close the League of Legends game and relaunch it so that you can appear offline.

When you’re done having your alone time, you can switch back to the online mode. You can quickly achieve this by applying the next steps:

If you didn’t appear online after following the above steps, it’s because you didn’t run “cmd.exe” as an administrator, or you didn’t put the correct text into “cmd.exe.”

Before you get skeptical about using a third-party app, you need to know that Deceive is safe and legal. That is, it doesn’t steal your data or other personal stuff.

Using the Deceive app is pretty straightforward. You only need to download the app and launch the game. Make sure you launch the game with the Deceive client instead of using the standard League of Legends client. Keep in mind that you’re launching it in admin mode.

You may experience problems using the Deceive app from time to time, but rest assured that’ll cause you no harm. However, we advise that you use the Command Prompt because it’s more reliable than Deceive.

Reasons Gamers Want to Appear Offline on League of Legends

Here’re a few reasons gamers would want to appear offline on the game.

You may wish to keep your activity on the platform private. That is, you don’t want your friends to see that you’re online and spectate your game.

This mostly happens if you’re nervous or stressed when you feel someone is watching you. However, by switching to offline mode, people won’t be able to witness your games even when they know that you’re in one.

There are times you don’t feel like interacting with anyone on the platform, and you know they’d think you’re available since you’re online. You can choose to switch to offline mode and avoid any form of unwarranted conversations or game prompt.

There’re many things you could be busy doing on the League of Legends platform. For example, you could be buying or testing your champions, watching replays, or choosing skins. During that time, you wouldn’t want anything or anyone to distract you.

When you’re offline, you can avoid any form of game prompts or distractions. That’ll save you the stress of turning down games or “offending” your friends.

Another reason you’d want to appear offline is that you want to play on your own. You don’t want to feel agitated playing with someone else. Moreover, playing with another gamer can be draining when you take your new champion on a test run.

Playing games and chatting with friends can be fun, but there are times you’d rather not be disturbed. Rejecting your friends’ requests and chats and avoiding others witnessing you while playing can create awkward situations.

By choosing to appear offline, you’ll have the freedom to manage your time as you wish. To appear offline on League of Legends, you can use either Command Prompt or a third-party app, Deceive, which is perfectly safe.

The step-by-step instructions mentioned in the article are easy to follow and will grant you a safe hiding place. And remember, you can quickly switch from offline to online mode at any time. Happy gaming!