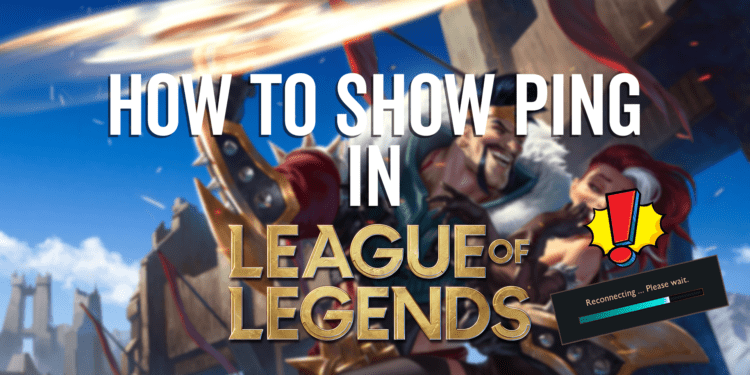 League Of Legends made its debut as a game around fall of 2009, which means that people have been playing it for 12 years. Millions of players have invested so much time in this game that it has become an unbreakable part of their lives.

That’s why every little detail in the interface matters, and today, we’ll talk about “ping”, which relates to the speed of the connection between your server and the League Of Legends server.

According to the strength of your connection, you receive a number in milliseconds. That number decides how your gaming experience will look in terms of smoothness, lag, and your position in the team, whether you’re a giver or a taker.

So, today we’ll discuss how always to show your ping and how to maintain a low ping during your game.

Primarily, you need to understand the basics of the difference between “ping” and “pings”, as many can confuse the two when they’re drastically different.

Displayed in the top right corner of your interface, ping is measured in milliseconds. It’s how long your internet is taking to carry packets from you to the server of League Of Legends.

However, if you start going above 80, that’s when you’ll begin to face serious trouble. You don’t want to begin a game when your ping is above 80 because everyone will be speeding around you while you’re just stoic.

However, pings are alerts that you send out to your teammates to alert them about all sorts of stuff happening inside of the game. That can be an approaching monster, a purchase that you’ve made, and more.

You may also like: best mouse for league of legends.

How to Show Ping in League of Legends?

So far, we’ve established that knowing your ping is essential. If you lose track of it, you might forget where the problem is coming from, which is why you must always keep your ping right where you can see it.

The general settings of the game are programmed to show the ping at all times. Yet, sometimes the settings can be overwritten for various reasons. More often than not, you can get your ping back if you press Ctrl+F, which is the default hotkey combination for showing your ping.

Again, sometimes this hotkey can be malfunctioning for any reason, which brings us to a few steps that you’ll go through to change it back to normal or to any combination that might suit you better. Just make sure that this combination isn’t already used for something else.

This scheme works perfectly when you aren’t inside a game. And it’s better to make these changes while you aren’t playing because some changes require some time to work properly.

Nevertheless, if you’re stuck in a game and you do need to see your ping or even share it with your teammates, you’ll have to press “Escape”, go on to the settings options, and continue with the steps as shown before.

You may also like: best controller for league of legends.

How to Show Ping in Your Chat?

There are plenty of reasons you might choose to show your ping number in a group chat. Mainly, it could be because you require help. Also, you might wish to give your teammates a heads up that you aren’t doing so well, and you might need coverage till you sort out your problems.

Furthermore, your teammates might prove to be even more helpful and start giving you advice on how to lower your ping so that you can get back in the game with full strength.

Another reason is to showcase how great your connection is! In other words, you can show your ping to let others know that you’re capable of helping if anyone is struggling with a low ping. This way, your team will know that you’re able to pick up the slack for them.

So, what you need to do is press the hotkey combination for your FPS. Now, that should typically be “Ctrl+F” if you haven’t changed it.

Next, you need to hold down the “ALT” key and, simultaneously, make a left-click on your ping number on the right side of your screen. Only then will a pop-up message appear in the group chat with your user name and ping number.

Also, you needn’t worry; this message is only visible to you and your teammates. So, others won’t have access to it.

How to Maintain a Low Ping?

For one, replace your Wi-Fi connection with an ethernet modem cable to keep a stable connection rather than the turbulent one that Wi-Fi can cause at times. Furthermore, don’t forget that the internet can be affected by the weather. So, don’t expect a low ping if your state/area is going through some harsh weather conditions.

Additionally, try to play when no one else is using the internet. Having more than one device connected to the same internet can significantly increase your ping due to the high demand.

Another thing is the programs opened on your device. If they do require the internet to work in the background, you’ll be better off without them. That way, you can focus all of the connection power on your game.

Another step you can take is checking for issues. In order to know the origin of the problems and how you can fix them, you can go to RIOT’s server page. You’ll find an icon for League Of Legends there. Click on it, and enter your server location. What this page does is that it checks for general problems with your server and lets you know all about them.

Moreover, you can go with the most basic solution: resetting your internet connection. Needless to say, do that when you aren’t in the middle of a game because your internet might take a few minutes to stabilize and get back to being full-strength.

Lastly, we kept this last because it’s the most challenging solution. You can change your server to one that’s closer to that of League Of Legends. It isn’t an easy procedure, and it’ll cost you RP. Not to mention, it includes many steps that can be pretty confusing and time-consuming. Nevertheless, it’s a final solution to maintain a low ping at all times.

To wrap up, ping is simply the strength of your internet connection. It relates to how fast data can travel from you to the League Of Legends survey. So, it must be kept below 80 in order for you to maintain a smooth game.

And the optimal number is below 50, as it won’t just allow you to be on top of your game but also pick up where your less fortunate teammates aren’t able to keep up.

So, before you start your game, make sure that you’ve gone through with as many of the steps to lower your ping as possible. This way, you aren’t stopped mid-game to fix something while your teammates are backing you up. Instead, you get to put your all into the game, so good luck!